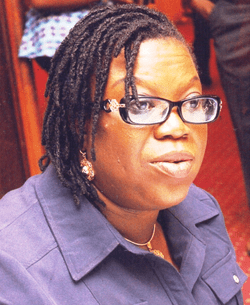 Dr Abiola Akiyode-Afolabi, the Executive Director, Women Advocates Research & Documentation Centre, WARDC, speaks on the rise in rape cases. Rape has of late been on the rise. Do we have adequate deterrent for potential rapists?

As we all know, rape is an unjustifiable act that is condemned in our society. The severity of the offence of rape cannot be over-emphasized. Therefore, the punishment meted out should not be lenient. By virtue of our Criminal Code, Penal Code and Violence Against Persons Prohibition Act, the punishment for rape is life imprisonment. In my opinion, life imprisonment is not adequate for a despicable act such as rape because the convicted rapist may be granted pardon by an incoming government. The preferred punishment for rape is the maximum punishment with hard labour. Let’s look at the number of rape cases that have been reported in the country in the last couple of years. Do we have reliable data? About two million women and girls are raped every year and only about 28% of these cases are reported. Though, there is no data to support or disprove this claim. However, it is hoped that the Sex Offenders Register that was launched in 2019 will serve as a data gathering tool on reported cases.